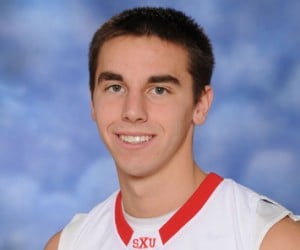 St. Xavier University's sophomore guard was recognized three times in the past week, twice for his basketball exploits and once for his classroom achievements. Karp, a Valparaiso graduate, became the first Cougars player in four years selected as the NAIA National Division I Men's Basketball Player of the Week, one day after earning his fourth Player of the Week honor this season from the Chicagoland Collegiate Athletic Conference.

In addition, Karp was named to the Capital One Academic All-District team. The latter group was chosen by the College Sports Information Directors of America, and each student-athlete is now eligible to become an Academic All-American.

Karp's NAIA award came after he averaged 31 points, 13 rebounds and 3.5 assists in a pair of CCAC games the week of Jan. 30. He notched career highs of 39 points and 20 rebounds in SXU's 99-96 loss to top-ranked Robert Morris University.

Give us some info and we'll get quotes from multiple companies.