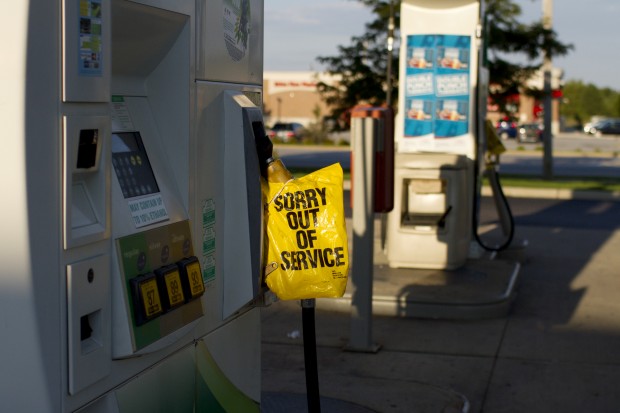 The BP gas station at the corner of Main Street and Calumet Avenue in Munster remain out of service Monday because of a recall on BP gas. Hundreds of gasoline buyers in Northwest Indiana and Chicago's south suburbs are reporting problems with their vehicles as a result of purchases made at stations in recent days.

BP set up a website to handle inquiries from people who may have been affected by the fuel quality issue in the Chicago, Milwaukee and Northwest Indiana areas this week.

BP said the site, www.bpresponse.com, is available for people to ask questions or get further information on how to file a claim.

The customer service line, (800) 333-3991 and bpconsum [at] bp [dot] com, will also handle complaints from people who bought gas and have vehicle problems.

Customers could also reach out to non-BP outlets that sold gas that may have caused vehicle problems.

BP spokesman Scott Dean said in making a claim, submit a gasoline sales receipt and repair bill in order to start the process. If a purchase receipt wasn't kept, he said usually bank statements will show where and when the purchase was made for the company to research.

Dean said people without gasoline purchase receipts from BP stations or others should still fill claims and the company would try to work with people on a case-by-case basis.

Also, people should check with their automobile insurance company to see if a claim could be made as a result of required vehicle repairs.

Several people told The Times wait times were longer than two hours Tuesday morning if they were able to get through to a representative at all. And a handful of people interviewed who did speak to company personnel weren't happy with the result.

In a statement issued Tuesday, BP said it believes a 50,000-barrel batch of regular grade gasoline blended at its Whiting fuel storage terminal between Aug. 13 and Friday contained a higher than normal level of polymeric residue, which are larger hydrocarbon molecules that can clog fuel injectors and foul spark plugs. Resulting problems the company identified were hard stalling, stopping and other driving issues.

"BP is not making it easy for us to receive compensation for their error," Crown Point resident Elizabeth Paul said about the claims process.

Paul said she has spent $359.52 for a vehicle inspection, fuel system cleaning and tune-up and $40 for a rental car. She told The Times that after spending about two hours and 15 minutes on hold with BP customer service, she was ticked off that she'd have to call back to let them know when she sends her claim information.

Pat Cappo, of Munster, said the BP hotline had a wait time of 100 minutes when she called before 7 a.m.

But Cappo said she bought regular gasoline Thursday from a Meijer station in Highland and her vehicle began to have problems starting up Saturday, Sunday and Monday after the vehicle was left parked overnight. On Tuesday, she reached out to Meijer's customer service department and got a message from its online service center that her issue would be reviewed.

While waiting for a response, a mechanic told her to add fuel injector cleaner to the vehicle and run the bad gas in the vehicle down to empty then add a tank full of higher grade gas.

Other people, including Andrew Johnsen, of Cedar Lake, said he called customer service lines at BP and Thorntons on Tuesday, but each one said the other should be handling his vehicle repair claim.

Angela Pinta learned about the gasoline issues the hard way after she struggled to start her car Friday morning after receiving an emergency call from her hospital employer. Pinta, who works on-call as a surgical nurse and lives in Gary's Miller section, said she wishes she didn't have to worry about whether her car will start every morning. But for now, she's waiting to clear out the $75 in gasoline she bought for her Ford Explorer from a Mr. Fuel station in Gary.

"There are people that need reliable cars like myself," Pinta said.

In statements to media, BP reiterated the apology it made Monday for the inconvenience caused for customers and that it was working with customers who loaded tanker trucks at the terminal during the period of interest. It pledged to replace the contaminated fuel with fresh product.

Give us some info and we'll get quotes from multiple companies.